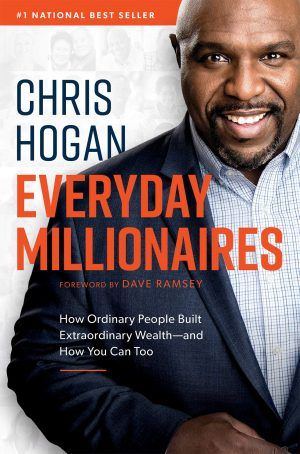 Everyday Millionaires is the inspired work of Chris Hogan, one of the leaders in the Ramsey Solutions organization.  He and Dave Ramsey dedicate their career to giving hope and practical tips to help people get out of debt and build wealth.

In a bold project, Hogan and his team conducted the largest study of millionaires in U.S. history.  For this project, they surveyed over 10,000 millionaires.  After analyzing qualitative and quantitative data, they came up with over 140 statistics about millionaires and collected dozens of inspiring stories about real-life millionaires.

Do you believe the American Dream is dead?

It seems that everyone from politicians to TV personalities to ordinary people on social media spend a lot of time telling everyone that it’s impossible to achieve financial prosperity.  “The deck is stacked against you,” they say.  You’ll hear that the “little man can’t get ahead.”  Others say, “Wall Street and the evil corporations are keeping all the wealth for themselves.  The rich get richer and the poor get poorer.”

Sure, the rich get richer, but so do the poor!

Everyday Millionaires is an inspiring book that offers hope as well as actionable steps that you can take to build wealth for your family.

One of the things that Hogan and his team do incredibly well is bust some widely-held myths about everyday millionaires.  Here are a few of the myths they thoroughly debunk through their research.

One of the things missing from that list is, “millionaires make a lot of money.”  The average millionaire makes <$100,000/year and lives in a house < 3,000 square feet.

Despite that, over half of the millionaires in America are under the age of 54!

In fact, the median age for attaining millionaire status is 50 years old, according to the study.

I was a little surprised to learn that the top five occupations held by millionaires didn’t include physician or dentist.  However, schoolteacher was #3!

So, what does the average American schoolteacher do that most doctors don’t?  They spend less than they make, avoid debt, and save consistently.  It’s pretty simple, really.

Over 70% of millionaires have never even taken out student loans!  That’s one of the reasons they became millionaires in the first place!

A third of millionaires report having shopped at thrift stores in the past year.

93% of the millionaires report using coupons some or all of the time!

So, what are the secrets of the wealthy?

Work, save, live cheaply, and repeat for several decades.

It’s boring, but it works every time.  It’s what my grandmother did before she retired as a multimillionaire, working as an elementary school career her whole life.

If you need a book that will convince you that the American Dream is alive and available, this it it!

Are you looking for someone to give you practical, actionable steps to take to get your personal finances to millionaire status?  Look no further!

Even the biggest cynic will have to acknowledge the sheer clarity of the statistics in this book.  I highly recommend it!

If you like that book, you’ll love these books as well:

Full disclosure: if you buy the book using any of the links on this page, I’ll earn a small commission from Amazon Associates.  Your support helps defray the cost of maintaining the site, and I really appreciate it!

Copyright © 2023 The Scope of Practice. All Rights Reserved.